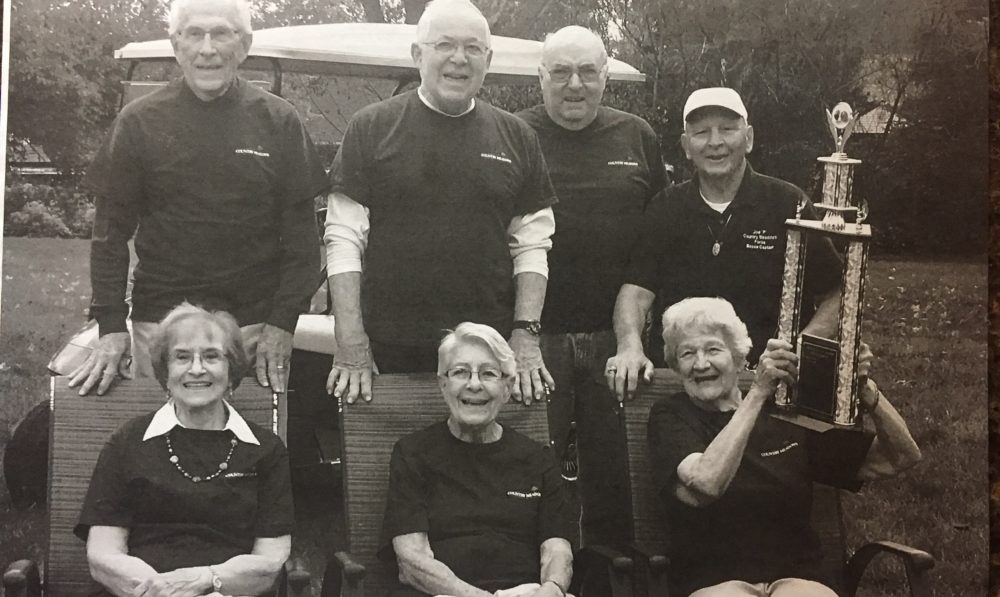 Bocce, in one form or another, has been played as far back as the Roman Empire, and possibly earlier. Two millennia later, it is still tremendously popular with some residents at the Lehigh Valley campuses of Country Meadows Retirement Communities. And yes, it really can get intense at times.

Brenda Kennedy, community life and fitness director at the Country Meadows campus in Forks Township in Easton, Pa., worked with the Italian American Club in Bethlehem to establish Country Meadows’ first ever Country Meadows bocce ball tournament between residents of the Bethlehem and Allentown campuses.

While recognizing the sport’s benefits of balance and agility, Chris Swope, Country Meadows fitness director at the time, also witnessed the pleasure and morale that residents derived from it. He encouraged them to take it up a notch with more competitive play, saying, “Everyone has that sense of competition in their spirit no matter what age we are.” 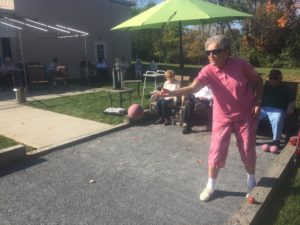 So, in 2016, Chris established the Lehigh Valley Senior Bocce Ball League, now consisting of the three area Country Meadows retirement homes (in Allentown, Bethlehem and Forks of Easton), as well as three more senior living communities. While the residents play for fun and exercise, they also play to win.

Games are played every other week from spring to fall on bocce courts at our Bethlehem and Forks campuses, culminating in a play-off for the championship in November. Last year, the Country Meadows’ Forks team proudly returned home with the league’s traveling trophy. At the end of the season, participants from all the communities get together for a celebratory happy hour. 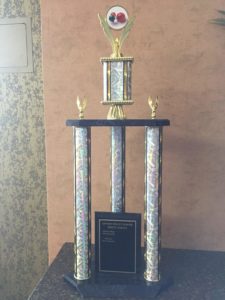 The Country Meadows Forks team will proudly exhibit the league’s traveling trophy for the next year.

Lehigh Valley residents refer to him as Joey Bocce Ball

At the Forks campus, one bocce competitor plays so enthusiastically that he has earned the nickname of “Joey Bocce Ball” from his fellow residents. Joe Piscitello recalls that, for many years, he played bocce twice a week. Two of his friends even had their own bocce alleys.

Joe’s love of bocce started 50 years ago when he was a recreation director in Northampton County, PA. The local bocce club had its own courts, so he included bocce in the recreation schedule and began playing himself. Half a century later, Joe is still competing as he enjoys senior living at Country Meadows.

“We’re lucky [at Country Meadows] to have a very good surface,” says Joe. “The material used in this bocce alley is the same material used in professional tennis when they have a soft surface. This is the best bocce ball alley that I’ve ever seen, and I’ve played in a lot of tournaments.”

The first Country Meadows bocce court, located on the Bethlehem campus, was installed with research and measurements from resident David Liverery. Though David has since passed away, a plaque at the court honors his contribution.

Bocce is just one of a number of active senior living activities enjoyed by Country Meadows residents. You will also find residents of our communities who like to bicycle, golf, swim, walk, dance, garden, practice yoga and engage in fitness exercise.

Kim Eichinger, executive director of fitness for Country Meadows, suggests being active for 30 minutes a day—either in several short sessions or sustained for a longer period of time. “Whatever you choose to do for a physical activity, make sure you enjoy it.” However, she advises seniors to see a physician before increasing their physical activity.

When choosing a retirement community, be sure to visit the ones that interest you and ask about their physical and social activities. We welcome you to visit any of our retirement homes in Pennsylvania as well as our Maryland retirement community. Please contact us to request information, schedule a visit or join us for an exercise class.