A
A
Home > Blog > The night the movers left me at Country Meadows I discovered good food, nice neighbors and tons of amenities 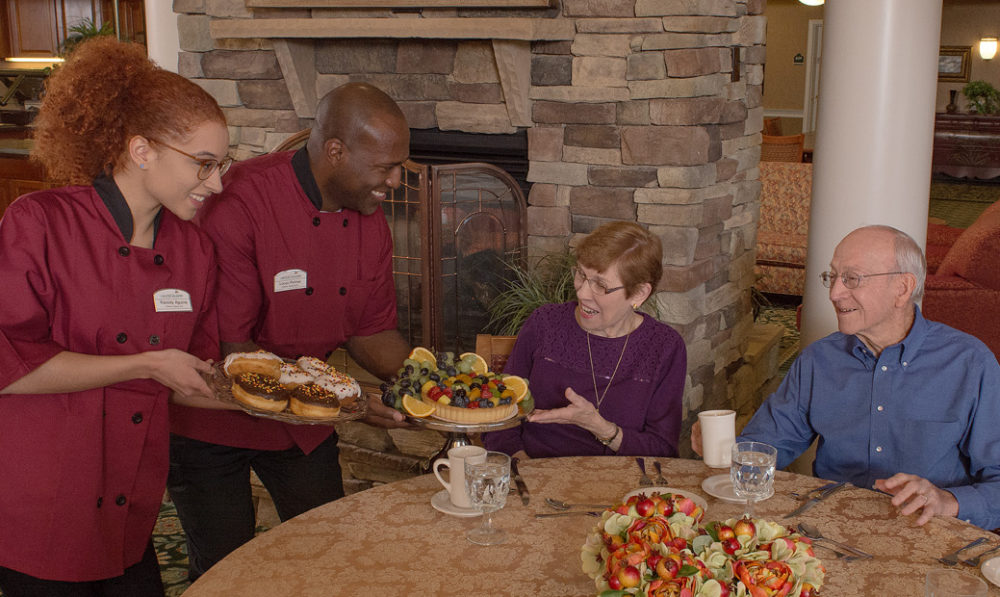 The night the movers left me at Country Meadows I discovered good food, nice neighbors and tons of amenities

The day I had long waited for finally arrived. It was a hot August day, and the movers arrived early in the morning before the real heat of the day came. I was amazed at how efficient the four men were as they traveled from room to room, carrying the furniture from the house. Not only were they efficient, but carefully handled each piece, and in some cases, wrapped them with blankets for protection. 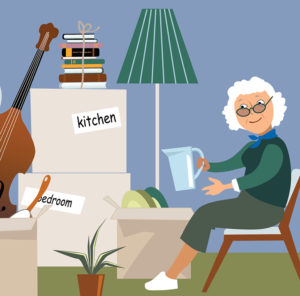 A little over two hours later, the furniture was being placed in my apartment – my new home! Following my instructions, each item was put where I requested to my satisfaction. I never anticipated such quick and perfect service. I had thought the move would take a full day.

The movers left, with warm wishes for me to enjoy my new home. I closed the door behind them, took a deep breath and looked around me. Yes, the furniture was in place, but the unpacked boxes were stacked along the walls. It looked as though I had my work cut out for me. I dug into the first box and filled the cupboards with pots, pans, dishes, silverware and glasses. That tired me out so I treated myself to a well-deserved nap. When I awoke, it was nearly 5:00, my dinner time. 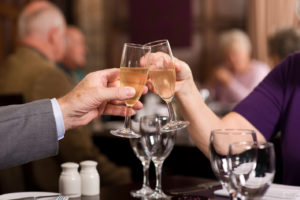 I was shown to my table, set with a lovely tablecloth, silverware, folded napkin and water glass filled with ice water. I was introduced to the people already seated – two married couples and a single lady. I was the 6th resident to sit there. Shortly after dinner was served, one of the men asked me for my age, and I told him I was 84. Each person related his or her age, and it turned out that I was the youngest of the group! They all laughed, and I became known as “the kid.” That was my first encounter with any of the residents, and I was pleased to see how warm and friendly they were.

The dining room soon filled with residents, seated at tables of 6. The servers were local high school boys and girls, who had been trained to bring us our dinner which had been ordered the night before. These young people, who always had a smile, quickly learned our names and soon became our friends as well as our servers. Before the main meal was served, we were offered a soup from two choices. The main course was served under a cover to keep it warm, and much to my surprise and delight, was quite tasty. I really had no thoughts as to what to expect, so I was impressed. And there was always a great salad bar. As the days passed, a variety of food was served, and I always had a choice. I could order a small meal if I didn’t want the large portion they normally served. And furthermore, if I didn’t want to eat what they offered, I could request something else – an omelet, hot dog, hamburger, grilled cheese sandwich and other offerings.

Then there was dessert- a choice of several luscious items brought to the table on a tray. All of them made my mouth water and it was hard to decide which to try – the cake, pie, cookies, ice cream (4 different varieties) or something special.

It took me a few days to get accustomed to these amenities, and I began to think like Little Orphan Annie, “I think I’m going to like it here!”

Each day I met new residents – they’d tell me their names, which I promptly forgot! I’d try to remember the names and gradually, one by one, I succeeded. I never realized there were so many women with the name Mary, Grace, Ruth or Janet; or men named Ed, John, or Tom. I was the only Judy on the roster, so it was easy for them to remember who I was, and I must admit, I appreciated being called by name, even if I couldn’t respond using theirs.

However, as the days turned into weeks, and the weeks became months, I became better at calling both men and women by their given names. I now feel as though I have officially settled in and become a resident of Country Meadows and can easily walk down a hallway or into a room of people and say, “Good morning (afternoon”) and use the person’s name, followed by a friendly conversation.

I still have to practice not getting lost in this campus, but I’m getting better.

To move or not to move to a retirement home community?