A
A
Home > Blog > Making the decision to move to a retirement community brings relief, questions and a search for boxes 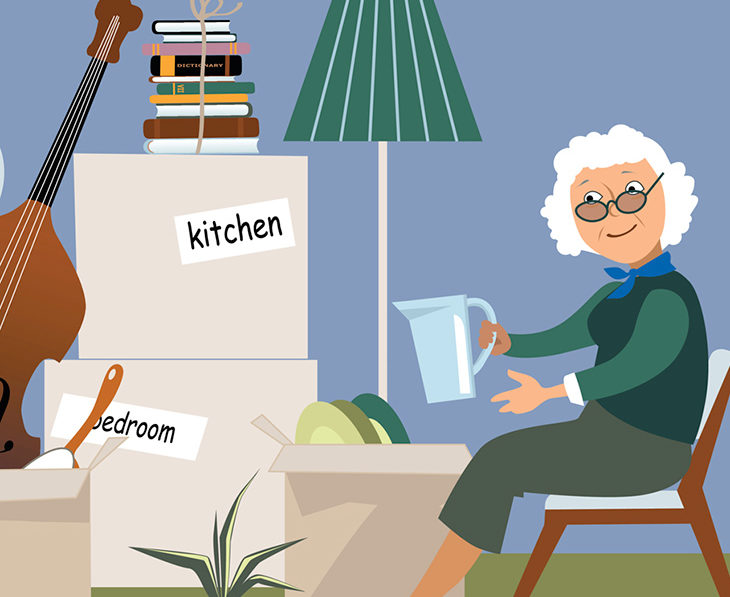 Making the decision to move to a retirement community brings relief, questions and a search for boxes

After my husband, Al, passed away at age 82, I continued to live in our home. It was a two-story brick home with 4 bedrooms, a finished basement, sun porch, gazebo and goldfish pond in back. It fit my needs and I saw no reason to leave it. I thought I could handle whatever maintenance needed to be done. I certainly wasn’t super woman, and often had to hire help.

After a couple of years of living alone, cooking just for me, I became lonely and tired easily. I maintained my active lifestyle and enjoyed getting together with friends, but it wasn’t the same. The house became too big! Perhaps moving into an apartment would be a good idea.

I visited many apartments and senior living places in the York area, but none appealed to me. I no longer could step over the edge of a bathtub to take a shower. I needed a walk-in shower, like the one we had installed in our home several years before.

They were scarce! Many of the units were lovely, but lacked warmth and charm. None were in an area where I wanted to be. I began to doubt my decision to move into an apartment and expressed my concerns to my children. My son (who lived in Connecticut) came to York and we toured the area together, looking for the “right” place.

Country Meadows on Leader Heights Road was on the agenda, and together we took a tour of this retirement community. There was something that resonated with me, and the more I saw, the more I liked what I saw. The interior was lovely with beautiful and elegant furnishings that reminded me of a high-class hotel. Everyone we passed in the hallways, staff or resident greeted us with a warm smile, saying “Hello,” or “Have a good day.”

Our tour guide, Ruthi, Director of Marketing, showed us a couple of apartments, pointing out that they all were equipped with a washer, dryer, dishwasher, microwave, and many closets. I was awed by the two dining rooms (just like in a hotel), and a Bistro for snacks and light meals. And what’s more, each of the three floors had lovely libraries, filled with books.

We visited the fitness center with exercise equipment and learned about the fitness classes and programs. The chapel on the third floor is also used for entertainment and speakers who come here. An indoor pool in another building is available for exercises and swimming.

The two hour-long tour convinced my son and me that I didn’t have to look any further for a new place to live. I signed up on the waiting list, and returned home feeling relieved.

Now my real work began – downsizing! I never realized how much stuff I had accumulated. Obviously I wouldn’t be able to keep everything so I began the sorting process. I surrounded myself with boxes, and marked each one according to what would be put inside them – clothing, household items, books, utensils, dishes, miscellaneous items, tools – you name it.

Gradually I took the filled boxes to the Salvation Army store, resale stores, used furniture stores, antique dealers and any other place that would accept my donations. Little by little I was once again able to walk through my house without tripping or falling over a box.

Then the call came from Country Meadows – An apartment would be ready in two weeks – was I interested? While they put in new carpeting, painted, and made sure everything was in good working order, I put my house on the market. Now I began to have mixed emotions – was I doing the right thing – selling my home where Al and I had lived for over 40 years, while raising three children?

I convinced myself that this was a good thing, and continued to prepare myself for the big move. There was no turning back. I made arrangements with a local independent mover (the major companies were entirely too expensive.)

As it turned out, the mover I hired was the son of a friend of mine, and turned out to be a gem. He developed his business seven years ago and was successful. He had a responsible crew, and they knew what they were doing. I have since recommended him to other people.

The house sold in a short period of time, much to my relief. When the settlement papers were signed, and the house was no longer mine, I felt as though a heavy burden had been lifted from my shoulders.

I know I’m not the only person who had this emotional journey of moving, and perhaps if you did experience a similar situation, you can relate to what I’ve said. Whew! Thank goodness it’s behind me!

9 thoughts on “Making the decision to move to a retirement community brings relief, questions and a search for boxes”