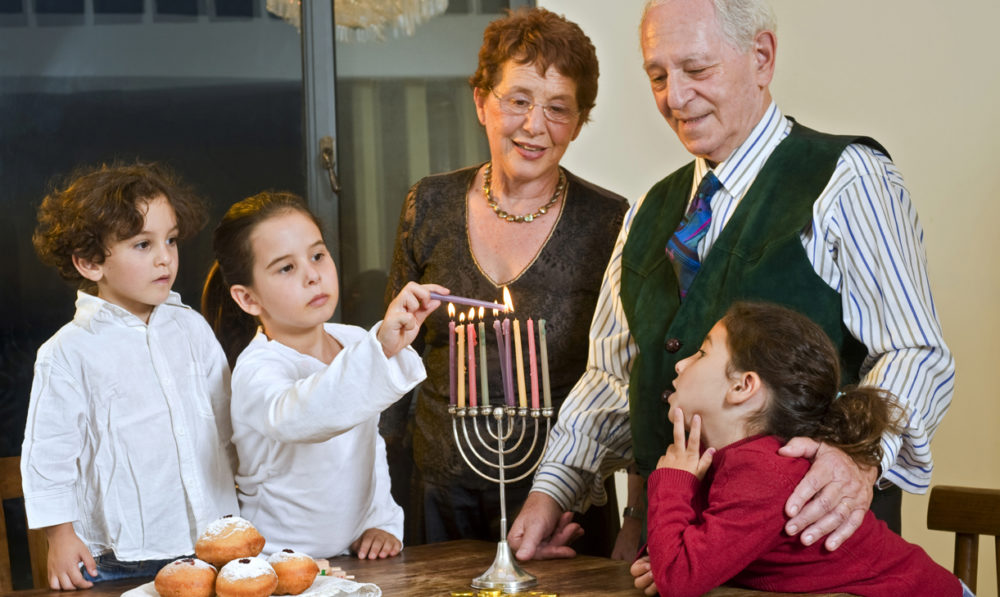 Are you aware that December has three major happy holidays in our country? Namely, Christmas, Hanukkah and Kwanzaa. Now you may wonder what they have in common, besides happening in December? The answer is that they all have glowing lights.

Hanukkah is the first one of the month, and on the first night (December 2) as soon as the sun goes down the first of eight candles is lit in a special menorah called a Hanukkiyah. The tallest candle called a Shamash is used to light the first candle and each one on the following nights.

Hanukkah helps Jews all over the world remember the time when a Syrian king (Antiochus) ruled the people in Israel. He wouldn’t let the Jews pray to God and broke all the holy items in their Temple. The Jewish people fought the king and his army for three years to get their Temple back. They cleaned it up and were ready to light the Temple lamp, but had only enough oil to burn for one day.

The next holiday is Christmas (December 25) when Christians celebrate the birth of their savior, Jesus Christ. It may be just one day, but the decorations and lights are seen the entire month of December. Christmas lights remind Christians of the light of God, through the birth of Christ.

The day after Christmas, the African-American holiday of Kwanzaa begins. Unlike Hanukkah and Christmas, Kwanzaa is not a religious holiday. It honors people of color and their history. It was created in 1966 by Maulana Karenga, an African-American teacher who wanted to teach his students about African ways and holidays. 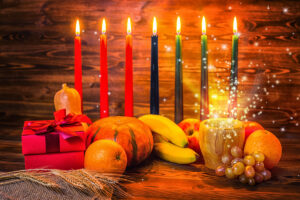 Kwanzaa begins on December 26 and ends January 1, and honors African heritage in African-American culture. Many people get ready to celebrate the holiday in early December. They put the Kinara (candle holder) in the center of a table. It has seven candles – a black one in the center, three red candle on the left and three green ones on the right. Each night they light a candle, beginning with the black one on the first night. The next night a red one is lit. The third night a green one is lit, and so on until all of the candles are burning. As each new candle is lit, the people talk about one of the seven principles it represents. (You can click here to read more about the holiday and its seven principles.)

Besides having beautiful lights, Hanukkah, Christmas and Kwanzaa are joyful holidays with gifts, music and special foods. And they help the people who celebrate these holidays learn about their history to better understand themselves.

When I did research for this blog’s material, I realized how similar the various faiths are in many ways, and the lighting of candles seemed to be the one tradition that tied them all together. I guess because my background is of the Jewish faith, I began to have childhood memories of Hanukkah, which I’ll share with you.

Most of my friends celebrated Christmas and often expressed envy that since I celebrated Hanukkah for eight days, and received a gift each day, I got so many presents. They, on the other hand, got all of their presents on Christmas day. They never stopped to realize that their presents numbered more than my one-a-day gifts.

I well remember that on the first night of Hanukkah, Dad came home early from work so he could be with us when the sun went down and the holiday began. Mom put two candles in the Hanukkiyah and while lighting them, she said two Hebrew blessings, which she repeated in English. Each night another candle was lit (using the Shamash) and the blessings repeated, until on the last night, all of the candles were burning.

We sat down at the dinner table, but before eating, my sisters and I told what happened in Israel over 2000 years ago. The story always reminded me how fortunate we are to live freely in America and not have to worry about our temple being destroyed or our religious freedom being taken from us.

After we told the story, Mom brought out the platters of dinner—potato latkes (pancakes) fried in oil to remind us of the miracle of the oil. Mom and Dad liked sour cream with their latkes, but my sisters preferred applesauce. I personally like them plain.

When dinner was over, we exchanged gifts, sang Hanukkah songs and played games with the dreidel—a special spinning top. Sometimes a friend would have a Hanukkah party, where we ate more latkes, sang songs and danced to Israeli tunes. It was always a happy time and I looked forward to it every year.

As a candle was added to the Hanukkiyah each night, the glow got brighter and more beautiful. On the last night all of the candles burned and it was easy to see why this holiday was often called the Festival of Lights. We sat our Hanukkiyah with its burning candles in the front window for everyone to see and enjoy.

I’m thrilled we can learn more about these traditions here at Country Meadows and share our spiritual customs and traditions. Happy holidays!