Resident shares her story to help others find peace, love, and humanity

Today, Jan. 27, 2020, marks the 75th anniversary of the liberation of Auschwitz, the largest and deadliest Nazi concentration camp during World War II.

Country Meadows of York-South resident Bluma Shapiro considers herself blessed, and believes the fact that she is alive today a miracle.

Bluma Shapiro relaxes at Country Meadows of York-South, where she resides.

Born in 1923 in Bialystock, Poland, Shapiro grew up in a close-knit family with five brothers and sisters. She attended a private Jewish school where she was an active student. She applied to study chemistry at Leningrad University.

She was never able to attend.

Soon after her graduation from high school, Nazi soldiers arrived in Bialystok, and Shapiro recalls they locked 2,000 Jews in a synagogue and set it on fire. “From then on, different kinds of atrocities took place,” she says.

She and her family were among the thousands of Jewish families moved to the ghetto where the perimeter was sealed by Nazi guards. Ghetto residents were starved and forced to work in textile plants making uniforms for Nazi troops. Jews were forced to wear yellow star insignias and shot in the streets if they were spotted outside after dark.

Shapiro was lucky. She spoke fluent German and because of that skill, was sent to work with a German man named Otto Busse, who treated her with respect. He and his wife, Edna, offered Shapiro food and helped her smuggle it into the ghetto for her family.

She remembers refugees from western Poland pouring into her town telling horrible tales of German Nazi troops “liquidating” Jews from the surrounding cities. She says, “They told us that some of the Jews were hiding so they could survive. So our family made a bunker with a little food, a little water, just in case something would happen. Sure enough, in February of 1943, there was a proclamation that all the Jews were to be resettled into Germany.”

Shapiro’s family sent her to hide with a group of doctors who offered her shelter. They believed it was her best chance for survival. It was the last time she ever saw her parents. “It wasn’t an easy decision by me or my parents, but they thought maybe we should break up so some would have a chance to survive,” she says. With tears, she adds, “August 23, 1943, was the last time I saw my parents.”

While in the bunker, Shapiro remembers hearing German trucks come into the ghetto, and frequent shooting and screaming as families were ripped from their hiding places. Sometimes people would sneak out of bunkers in the evening, when the German soldiers had gone, to see what had taken place in the village. “They saw bodies of little children and elderly people lying in the streets. Germans heard the children crying, [which gave away bunker locations,]” she says, tearfully, adding “Don’t let anyone say that Jews went like animals to slaughter. They fought!”

She stayed in the bunker for eight days while German troops searched for the entrance. “One day we heard the Germans saying, ‘if they don’t come out, and we can’t find the entrance, we’ll just start a fire and let them burn.’ We decided to come out and gave ourselves up.”

When Bluma Shapiro arrived at Auschwitz, she was painfully tattooed with her new identity: A12515.

The group was marched to a train station where they saw people packed on train cattle cars, surrounded by Nazi soldiers with machine guns. Shapiro was sent via Treblinka, Majdanek and other concentration camps, to Auschwitz Birkenau, where an estimated 900,000 people were gassed upon arrival, and another 200,000 people died of disease or labor.

Shapiro recalls stepping off the train and seeing the infamous sign which reads “arbeit macht frei,” which translates to “Work makes one free.” Here the women were forced to undress, shaved of all body hair and taken into showers. Shapiro’s shoes were discarded into a large pile. She was devastated to lose the only memory of her family—a photo she had hidden in her shoe.

Here she saw a man who hid in her parents’ bunker. He told her that her parents were sent to the gas chambers.

And she became a number: A12515 was painfully tattooed on her forearm. “A is for Auschwitz, and this is my number. There were no more names. You were known by your number,” she says. “They put points on the [tattoo] numbers so it hurt more; everything was to make you suffer you more.”

She painfully shares some of the atrocities she witnessed, including the story of a woman who was shot to death for carrying eggs in her underwear, and the horror of a child the Nazis ripped from a mother’s arms and threw into the air to use as a human clay pigeon.

More than once she found herself in a line while Dr. Josef Mengela—a Nazi physician notorious for performing cruel, unscientific medical experiments on inmates—selected subjects. She is thankful she was never selected. “After he performed selection, you would hear crying and screaming from the barracks all night and in the morning, the stink of burning flesh and bones permeated the camp,” she says. 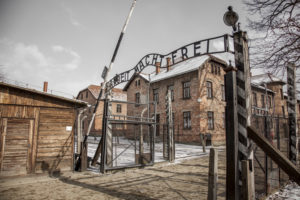 The infamous sign at the entrance to Auschwitz which translates to read, “Work makes one free.”

For two years Shapiro endured the atrocities at Auschwitz until Nazis abandoned the camp. Reduced to skin and bones, Shapiro found herself part of a forced death march further into Germany to stay ahead of the advancing Russians. She was removed just days before Auschwitz was liberated, and spent four months in Ravensbruck when she was rescued.

Today Shapiro doesn’t focus on the horrible things she’s seen. She views her experiences as opportunities to educate others so it never happens again. “I was the youngest of five siblings and I was spoiled. Yet I survived. None of my siblings survived,” she says. “We need to remember it happened. It’s my duty to talk about this because I survived. God gave me the strength—this was meant for me.”

But she wasn’t always forthcoming. For decades Shapiro tried to forget the horror, and kept the gruesome stories to herself; she didn’t even share with her husband. That changed in 1976 when a book was published that denied the holocaust ever took place.

“I said, ‘look at me; I’m here, I lost my whole family, I went to Auschwitz, and he is telling me it never happened?’” she exclaims and says her husband convinced her to talk so it didn’t happen again.

She hopes her experiences help others find peace. “I look around and see people always fighting. I think ‘maybe if I talk about it, maybe people will come closer to one another and see that we are the same people.’ We want peace, good work and the chance to have our children grow up in a better world,” she says, adding that she believes in humanity. “When I was in camp, perfect strangers helped us. We didn’t know them from anything, and for strangers to help me…I believe in humanity.”

In 1946 Shapiro met her husband Philip, who also lost his family during the holocaust, and was in hiding for two years. The couple immigrated to the United States in 1949 and eventually moved to Baltimore where they owned a kosher meat market.

Shapiro has returned to Auschwitz twice with family members. She recalls that she didn’t want to go in. “The tour guide told me to go in and he took a picture of me coming out.” The visits remind her how lucky she is to be a survivor.

She frequently speaks publicly about her experiences in the hope she can help prevent it from ever happening again. “I’m grateful to God that he gives me the strength to still talk about it at my age. If you save one person, you save a whole generation.”