A
A
Home > News > Resident pens books, serves as advocate for Parkinson’s disease

Patricia (Patti) Lightner never thought she would be living in a retirement community before the age of 60. Now she sees life at Ecumenical Retirement Community in Harrisburg, Pa., as a blessing and is grateful for the support she receives and friends she had made, saying, “People are so supportive here. It has made a difference.”

Diagnosed with Parkinson’s disease at the young age of 36, Lightner struggled to imagine what her future would hold. “The doctor gave me literature on Parkinson’s disease, but all of the books that I read painted a very dark picture and I wanted to know that there was hope for me,” she says. 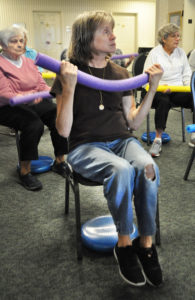 Since then, she has published three books about her journey with the illness to provide information to others facing the diagnosis. The first book, “Parkinson’s Disease and Me,” was written in 2003 and shares Lightner’s hardships after being diagnosed. She sheds light on some of the misunderstandings about the disease and how she misunderstood so much of Parkinson’s disease prior to her diagnosis. She also shares how she hid her disease for six years because she felt ashamed.

“Before my diagnosis, I was under the impression that you had to be 60 or older to be diagnosed with Parkinson’s, because you never really see anyone who’s young with the disease,” Lightner says. “That is such a large misconception and I am an example of that.”

Her second book, “Joey and Parker: A Tail of Two Cats,” is told from the perspective of Lightner’s two cats, Joey and Parker. “I decided that writing from an animal’s perspective, particularly a cat’s, would be a fun twist on such a dark topic. It also sheds some light on living with someone who has been diagnosed with Parkinson’s disease,” she says.

Her third book, “Just Give it Some Thought,” was written in 2016 and is a collection of poetry, short stories and everyday reflections. “Writing is very therapeutic to me, so a lot of the stories and poetry were already created before I put them together in a book,” Lightner says. “It just made sense to put them all together in one inspirational piece that I and others can refer to.”

Realizing that she could no longer live on her own, Lightner moved to Ecumenical Retirement Community in 2015. 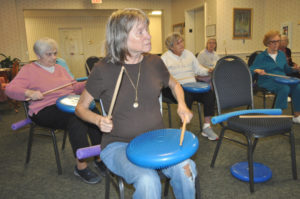 “I like living in independent living and I try really hard to stay here. That’s my motto—independent living—I can do it, just with a little help,” she says, adding, “Since I have Parkinson’s, it’s really nice that there are nurses on duty that can help me if I have any immediate medical needs.”

Exercise is very important to manage Lightner’s pain and stiffness. She enjoys some of the more physical activities Ecumenical offers, and is especially grateful for the campus’ Fitness Coordinator, Eugene Henry. “Eugene is very positive, encouraging and is absolutely helping me with his classes—endurance, strength, tai chi and balance. The exercise helps me to move my limbs and strengthen my core to move better.”

She adds that Henry’s encouragement reaches outside fitness classes. “When he sees me in the hallway he says, ‘big steps, big steps,’ to remind me to take big steps rather than little shuffling steps which can make me fall.”

One of Lightner’s favorite things about living at Ecumenical is socializing with other residents and co-workers. “Sometimes there can be a pretty decent age gap between some of the residents and myself, but I have become quite good friends with many of the residents here,” she says. “I really enjoy my time here and to me, age is only a number.”