A
A
Home > News > Corporate > Program reaches residents with dementia 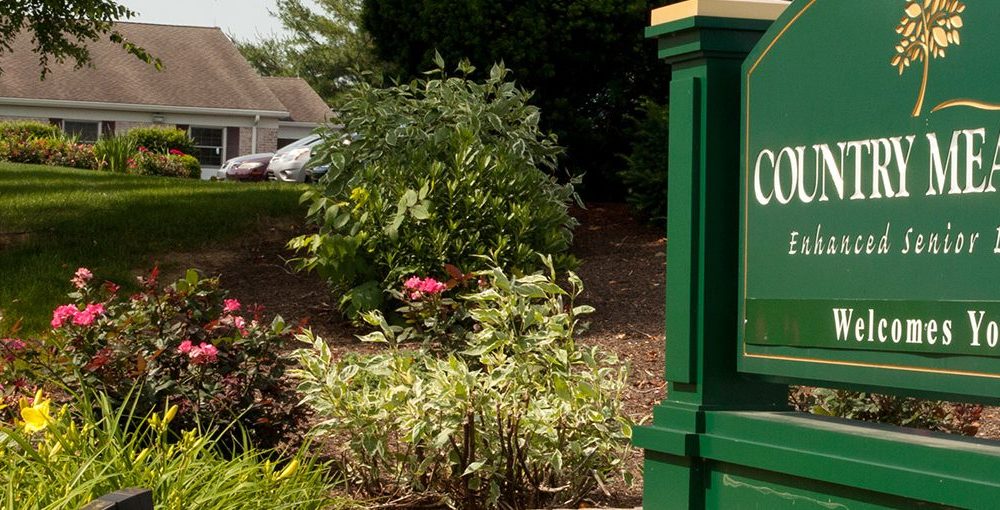 The “mother tone” in the resident’s voice stops co-worker Maureen Sirianni cold in her tracks. The woman, who does not speak due to advanced dementia, is having a loving discussion with three stuffed bears. As she listens, Sirianni, Connections memory support manager at Country Meadows of South Hills near Pittsburgh, realizes the resident is talking to her three children to resolve a family situation. For a moment, the mother, who is typically locked deep within symptoms of Alzheimer’s disease, emerges and finds her voice. 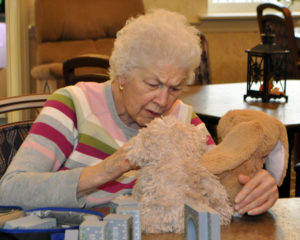 During Fine Art Miracle, a resident who doesn’t speak due to dementia, finds her voice interacting with stuffed animals.

“That’s very powerful,” says Sirianni. “You don’t stop being a mother just because you have a challenge with memory. It doesn’t take away your role in life. So to see her have that moment was just very humbling for me.”

The moment occurred during a pilot series of multi-sensory sessions for residents with Alzheimer’s disease and advanced dementia held at Country Meadows. Laughter, conversations, increased alertness, relaxation, stronger gait, recognition of the instructor, and easier transitions to the next activity were among other promising results observed.

The pilot program is provided by Fine Art Miracles, Inc. (FAM), supported by grants from the Jewish Health Care Foundation and the Buhl Foundation. Tess Lojacono, CEO of FAM, credits Sirianni with helping her rethink programming for memory care residents and providing an opportunity test the result.
“Maureen is one of those people who doesn’t say ‘no,’ she says ‘how can we make it work better,'” says Lojacono.

After noticing that memory care residents didn’t respond to traditional art therapy sessions for seniors, Lojacono spoke to Sirianni about her desire to create a more beneficial program. Rather than try to draw them into her world, she wanted to put the focus on entering their world through multi-sensory engagement. Through research and observation, Lojacono found a variety of tools to test, and Sirianni invited her to bring them to Country Meadows. As they met, two memory care residents came into the room and took interest in the items on the table.

“I love to share ideas and create new opportunities,” says Sirianni, who has worked in memory care for 21 years. “I feel very fortunate that at Country Meadows, we are constantly looking for new ways to reach our residents, and I’m given the freedom and encouraged to be creative with that.”

For the weekly pilot sessions, Sirianni selected residents who are far along in the global deterioration scale—a measure used to assess the progression of dementia. She and Lojacono experimented with everything from the time of day the program was offered, to the size of the room.

“I learned a few things,” says Sirianni. “I expected that the smallest room would be the best environment, but it turned out to be a larger room with high ceilings that worked the best.”

There were other surprises, too. At the beginning the ladies guessed 30 minutes would be a good length of time for the multi-sensory experience, but by the end of the pilot testing, most sessions lasted a full 90 minutes. Sirianni also was surprised by the success of “Romibo,” a social robot. At about one-foot tall, covered with fur and a pair of expressive eyes that blink, Romibo moves around the table to ask questions and interact with residents to stimulate conversation. To Sirianni’s surprise, residents readily touched and engaged with Romibo.

Other sensory stimulants used in the sessions include aromas, music and a sensory covering, which is a specially designed blanket that has a variety of textures, colors, appliques of pictures, and pockets that can hold items. The use of these four types of sensory engagement enables residents to participate in any way they can without expectations or judgement.

The sessions, which are designed for up to six participants, incorporate all of the sensory stimulants around a central theme. For a cooking-themed experience, the room might smell like baking apples and blanket pockets might include an egg beater, whisk or plastic cookie cutters. The blanket might also have pictures of cookies, pies or a rolling pin. It is placed on the table and then rotated several times throughout the session to give everyone an opportunity to explore different parts. In the meantime, Romibo makes his rounds to ask each resident questions about cooking and his/her experiences.

Lojacono recalls a resident picked up a hand mixer and began cranking it to show Romibo how it worked. At the beginning of another session a resident asked, “Did you bring me something good to smell?” indicating that he remembered the instructor from a previous session. In general, faces relaxed, shoulders went down and everyone enjoyed themselves. One resident who frequently cries, stopped crying during the sessions. Another who frequently wanders away from activities, stayed at the table because he was so engaged.

“The fact that this is a place where they cannot make a mistake makes it very relaxing. It reduces their stress because they don’t have to worry that they may do or say something wrong,” says Lojacono.

Sirianni and Lojacono presented findings at a recent Alzheimer’s Association conference and Lojacono now offers the multi-sensory sessions as a regular part of her FAM programming.

“I think it’s a game changer,” she says. “If we can get this into memory care at other locations, we may be able to provide relief and show residents that whatever your ability, you’re okay and we love you. It’s a way to reach them and say, ‘There’s a reason to be here, and we just want to be with you.'”

“This is what we’re always seeking for our residents. It’s that human connection so that even in the advanced stages of dementia, they know that they are loved and have a purpose,” notes Sirianni. “When someone is declining, we must remember that the person is in there. They can still feel emotions and express their feelings in a non-verbal way. This program provides our residents with meaningful moments of intimacy. They are able to relive a past pleasure in real-time, bringing memories back to life.”

Click here to watch video of the program in action.