At 102 years young, Country Meadows of Lancaster resident Marion Mort shows no signs of slowing down his commitment to the causes he loves. The founder of Lancaster Paper Supply Co., Mort shares his success with organizations dedicated to making the world a better place. 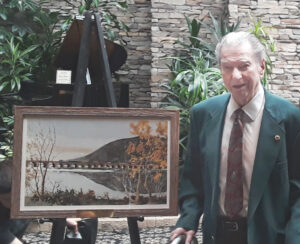 As Philanthropist of the Year, Country Meadows of Lancaster resident Marion Mort received a framed print of the Rockville Bridge painting by David Lenker. This railroad bridge spans 3,830 feet connecting both shores of the Susquehanna River. Like its recipient, the bridge makers followed their vision and helped bring the region together for the benefit of all.

He was recently named Philanthropist of the Year by the Central Pennsylvania chapter of the Association of Fundraising Professionals. The award honors an individual of with a proven record of exceptional generosity who, through direct financial support, demonstrates outstanding civic and charitable responsibility, and whose generosity encourages others to take philanthropic roles in the community.

Mort is a dedicated and humble philanthropist who wishes not to have contributions reflected in dollars donated, but rather in lives changed. He says, “I know in my passing that I will soon be forgotten, but I hope that my efforts in trying to give some help to the less fortunate will be remembered and appreciated, and I am leaving with a mark of betterment.”