It’s never too late for love

Country Meadows residents find love in each other, tie the knot

The newlyweds sway slowly to the music. Looking into each other’s eyes, they sing the words to Irving Berlin’s “Always,” the song they chose for their first dance. As they finish the last refrain, 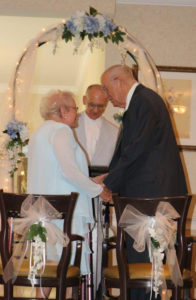 Like any bride and groom, they are giddy with love, and looking forward to sharing the next chapter in their lives together. But for Jane Zaffiro, 92, and Ervin “Erv” Walcheske, 89, residents at Country Meadows of Wyomissing, that chapter is beginning a little later in life. As Zaffiro says, “It’s never too late for love.”

Their story began this past January when Walcheske noticed Zaffiro in the dining room shortly after she arrived at Country Meadows of Wyomissing. “I was at lunch one day and saw her at another table,” he explains. “There was an empty chair next to her, I asked to sit at the table and that’s how we met.” Soon they were sitting together at social events.

“As we talked we found out we had a lot of the same interests. We both love tennis and golfing and we were very attracted to each other,” says Zaffiro. “He’s a good Christian man and that’s very important to me.”

The happy couple enjoys their first dance as husband and wife.

“They are so happy with each other. It’s beautiful just to see true love still exists,” says Long. “The Country Meadows slogan is true-life does get better.”

“We feel the Lord brought us together,” says Zaffiro, who had firmly told her granddaughter that she would only be staying at Country Meadows for one month of rehabilitation when she moved in. Walcheske moved to Country Meadows a year earlier to build upon progress he made in his recovery from a broken hip.

As Walcheske’s son in-law and best man, Gary Yost, explained during the wedding toast, “When we moved Erv from Florida to Pennsylvania in 2015, our hope was that he would regain his health and strength. We worked with doctors and nurses and it seemed for every step forward there were two steps back. Then Country Meadows said ‘we think we can help,’ and the rest was history. Erv regained his health and stamina, and then Jane came, and he regained his joy—that spark in his eyes and someone to look forward to seeing every day.” 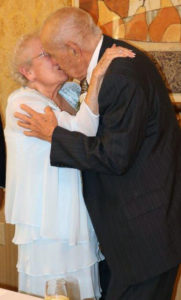 The newlyweds share a kiss at their Country Meadows reception.

Zaffiro’s granddaughter knew something had changed when her grandmother called after two and a half weeks to tell her she loved Country Meadows and wanted to stay. She suspects Walcheske had something to do with that. “She went from calling me daily to now rarely calling me at all,” she says. “But that’s a good thing. It means she’s busy and happy.”

As Zaffiro and Walcheske became inseparable, Zaffiro confided to Long that she hoped her beau would propose. In the meantime, Walcheske told Amber that he planned to propose. “I was just waiting for it to happen,” smiles Long.

While his daughter, Jan Yost, stopped in to visit, Walcheske introduced her to Zaffiro and hinted that he was “very fond” of her, but Yost was surprised when Long mentioned there might be a wedding proposal soon.

“My dad called on my husband’s birthday and said, ‘I proposed to Jane tonight.’ They wanted to get married as soon as possible, but we wanted to have everyone in the family here. It’s so wonderful to have a happy reason for all of us to come together,” says Yost. “There was a lot of planning, and Country Meadows was just incredible, wonderful in helping us.” 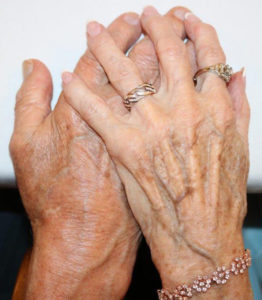 Yost recalls that before Zaffiro arrived, her dad participated in some activities, but now he’s involved in everything. “We just think it’s wonderful,” says Yost. “I feel like he’s my dad again—laughing and smiling and cracking jokes, he hadn’t been like that for some time, but that was my dad, and I couldn’t ask for anything more.”

Long noticed the change, too. “Erv used to be very impatient, but when he started hanging out with Jane, he always had a smile on his face. They are always very concerned about and looking after each other, and are very loving and caring. It’s beautiful to see them open up and to see the happiness.”

Zaffiro’s granddaughter says that her young children were skeptical, not wanting to see their great-grandmother sharing a kiss with Walcheske. Now they love seeing the couple together. She says, “My husband and I joke that they are like teenagers reliving that first young love. She’s over the moon. She’s so happy, and that’s our main goal.”

“It’s nice to share the day with so many people,” said Walcheske shortly before the ceremony. “All the caregivers are very nice people, and we’re extremely happy to see so many family members here.”

Co-worker Natassja Torres says, “It’s beautiful, emotional, to know that at any age you can find love.”