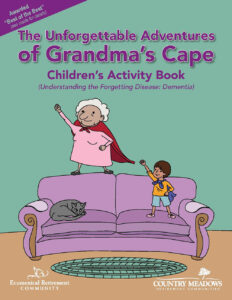 Understanding dementia is difficult, and maintaining relationships with affected loved ones can be challenging for all of us, especially children. To help kids develop stronger relationships with their loved ones who have dementia, Country Meadows Retirement Communities and its sister community, Ecumenical Retirement Community, created a children’s story and activity book. 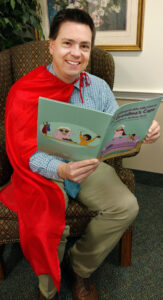 Country Meadows Executive Director of Memory Support, reads from “The Unforgettable Adventures of Grandma’s Cape,” a children’s book he wrote to help kids better understand dementia and how to interact with affected loved ones.

“The Unforgettable Adventures of Grandma’s Cape,” was written by Country Meadows’ Executive Director of Memory Support, Joel Kroft. It weaves the story of a child and his/her relationship with Grandma, and how that relationship is changing because of her “forgetting disease.” Along the way readers have different activities to complete, all focusing on thetopic of dementia/forgetfulness. As father to three young children, Kroft thought a story would help children connect to the information. He drew from his own experience with a grandmother who had Alzheimer’s disease as well as hundreds of other grandparents and families he has worked with at Country Meadows during the last 17 years.

“In some ways children are more accepting when their grandparent experiences dementia. But it can be confusing, in a child’s eyes, when an adult, who they typically look to for stability and guidance, isn’t providing that anymore,” explains Kroft. “They need help to make sense of that and to recognize that the person they love is still there.”

The story features an awesome, cape-wearing grandma who makes great chocolate chip cookies and has a zest for adventure. Kroft says the cape is a nod to the superhero quality of grandparents and their contributions to this world. Told from the grandchild’s point of view, the story reveals a sense of awe for grandma as well as what happens when she begins forgetting things. In addition to understanding the progression of the illness, the grandchild learns to use his/her own superhero powers to connect with grandma and continue showing her love.

Kroft tested the story with his children and received a positive response. Like many children’s stories, the narrative connects on multiple levels encouraging adults to think differently about making connections with their loved one with dementia, too.

In 2017, Country Meadows won a national Best of the Best award from Argentum for the children’s book. Kroft was honored to receive the award and thrilled with the book’s success. “It is overwhelming to think that the words I wrote and this book Country Meadows created is having such a positive effect on so many people.”

To breathe life into the book’s characters, Country Meadows partnered with the Pennsylvania College of Art and Design (PCA&D) in Lancaster, to create a character for a children’s story and activity book.

“This is information people need to have. We can’t deny the sadness of what we do. I have seen families struggle and even stop visiting as the disease progresses because it can be uncomfortable and even scary. There’s a misconception that because the person with dementia doesn’t remember or recognize family members they won’t miss the visits, but this is when it’s important to stay connected,” says Kroft. “People with dementia need loving, caring people in their lives to make the world make a little more sense, and this story shows family members how to make that happen.”

Stop by Country Meadows of York-West at 1900 Trolley Road to pick up a free copy of “The Unforgettable Adventures of Grandma’s Cape” at the front desk.