It is a small world, after all. And Forks in Easton campus residents Dorothy Eck and her late husband, Paul, recently were reminded of that fact. 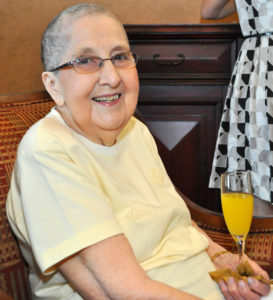 The charming couple moved into the brand new Country Meadows of Forks in Easton when it opened last July. For Dorothy Eck, this move was a long time coming. “I’d wanted to move to [a senior community] for years,” she says. “When we found out about this location, we crunched the numbers and right away and it was very feasible. I was bound and determined to move.”

Moving is not new for the Ecks. As a textile mill manager, Mr. Eck’s job required the couple to move frequently and they set up house in South Carolina, Georgia, North Carolina, Virginia and several locations in Pennsylvania.

Despite the many new addresses, an old friend always managed to track down the couple. “Our son was killed in 1977 and he had a very, very good friend since high school,” shares Mrs. Eck. “This friend tracked us down everywhere we went.”

When the couple moved to Country Meadows, the friend lost touch. But a twist of fate united them yet again. “He was driving past [the campus] one day when he saw a veteran’s banner with Paul’s name on it. Right away he called the front desk, gave his phone number and I called him,” says Eck, adding that the friend was thrilled he found the couple. “He was an only child and his mother died when he was very young. We were like his second set of parents,” she adds. 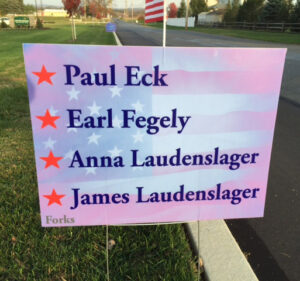 The veteran’s banner he saw is part of a tribute at every Country Meadows campus and Ecumenical Retirement Community. In honor of Veterans Day each November, the organizations create signs which are placed at the entrance to every community listing the respective campus’ residents who are veterans.

Sadly, the friends were unable to visit before Mr. Eck passed away Dec. 27, but were reunited at the funeral. “He’s a great guy. He goes to the cemetery to make sure everything is okay at my son’s [grave] and he was able to attend Paul’s funeral. He’s been a very good friend through the years.”

Since her husband’s death, Eck is happy she lives in a retirement community. “I am such a scaredy cat. When I lived in a house and I’d go home and he wouldn’t’ be there, I’d have to look under all the beds, open all the closets, check the garage 10 times,” she says. “I think he knew that he wasn’t going to make it and I wanted to move and I am so happy here.”

The Ecks’ daughter, Peggy Prentill, enjoys peace of mind knowing her mother is safe, comfortable and among friends. “The staff is all so nice and friendly. That must be a pre-requisite here to getting a job; you have to be nice!” she laughs. “They would do anything for the residents. Anything.”

Eck feels like she is at home, and her neighbor of 16 years also now resides at Country Meadows. “We both just love it here,” she says. “We were next door neighbors and good friends, and now we’re neighbors again.”