A group of residents at Country Meadows of Hershey can add “calendar model” to their list of accomplishments. 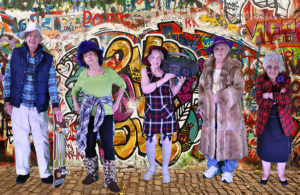 To raise money for the Alzheimer’s Association, co-workers came up with the idea to create a calendar featuring residents sporting attire from different eras in time.

June highlights residents in gangster and flapper gear from the 1920s while August features peace-loving hippies.

Resident Helen Barhyte enjoyed the experience. “They asked me to do it. It sounded like fun and I had a good time,” she says. “It gives you something to get out and do and be with other people, socializing. It was a good day out, it was fun.”

“Our goals were to fundraise for Alzheimer’s in a way that would be memorable and create memories for our residents,” says Samantha Simmons, director of Community Life. “It was a special day helping our residents feel glamorous. We all have those moments like when you go to the prom or your wedding day. We wanted to recreate that special feeling.”

Simmons spearheaded the project along with Pathways Manager Amber Kuhn and Connections Club Coordinator Amy Stoner. The trio managed and directed the calendar project and Resident Georgann Miller, who worked on a Philadelphia children’s show as a youngster, enjoyed the experience. “Socializing was the best part of the day. I was glad I was involved and I appreciate the hard work that went into it,” she says.

For fellow resident Vera Cardimona, the calendar had a special meaning. She tears up as she shares that she lost her brother to Alzheimer’s disease. For that reason she is thrilled the money raised is going to benefit Alzheimer’s research. She adds that she enjoyed her photo shoot. “I liked the excitement when they dressed me up. It was a lot of fun. We need excitement!”

Borrowing costumes from Hershey Area Playhouse and Masquerade Costuming, Kuhn says residents were matched with costumes based on personalities, hobbies and sizing. She adds the excitement wasn’t limited to the residents who participated. “Once we started this concept, everything from figuring out costumes to getting our first proofs, the buzz kept going. I can’t name another activity we’ve done at this campus that has had this much buzz for such a long time and brought so much joy, for such an extended period of time,” she says.

Kuhn and Simmons are quick to note that the calendar is a success because of the extraordinary team effort made by co-workers including Executive Director of Risk & Safety Mike Fure who handled graphic design, Employment Specialist Laura McGee who shared her photograph expertise, Fitness Coordinator Shari Pichini for custumes along with several other co-workers.

Barhyte recalls that, at first, she didn’t want to give up her home and move to Country Meadows three years ago. Her daughter’s concerns about her living alone and using stairs prompted her to move. Now she’s made new friends and enjoys fun activities, such as the calendar shoot. “You know you’re not alone and there’s always someone there for you. That’s great.”